A reader of Camer.be wrote to me: “the change will come by force and not by election in Cameroon”. That give me the opportunity to speak about this significant question. Revolution or election, the best way to overthrow Paul Biya regime, in my point of view, is not a question of dogmatism. It is a question of realism, a question of pragmatism. Are we able to take the power by revolution, today, in our country ? Are we able to do it by election ? What is the Cameroon experience of revolution ? What is its experience of election ?

THE REVOLUTION IN CAMEROON IN THE PAST

In 1956, December 2-3, Upc created its army, the CNO, Comité National d’Organisation, and launched its first attack two weeks later, in December 18-19. Immediately, the French army came. And from December 1956 to march 1957, it killed several thousands people in Bassaa land, burning villages, destroying harvests, using torture, and so on. From march to December 1957, there was a little break. It started again from 1957, December 9, until Ruben Um Nyobè was killed in 1958, September 13. It destroyed, one more time, the Bassaa land, burned several villages, killed many many thousands people. It was terrible.

In Bamileke land, Upc created its second army, named ALNK, Armée de Liberation Nationale Kamerunaise, in 1957-1958. That time, French army used aviation and bombed the country with napalm, cutting heads and displaying them in public places, like market places, and so on. The last heads displayed I saw were in Kompany, a small town near by Bafang, in Haut-Nkam division. It was in 1969. Let me tell you, it was something horrible. In 1970, Ernest Ouandié was trapped and arrested. He was killed in 1971, January 15, in Bafoussam.

In 1965, Ossendé Afana, one of the greatest upc leader after Um Nyobè death, started a guerrilla in the far-east of Cameroon, in the bush between Mouloundou and Wesso, a town of Congo Brazzaville. He was killed in 1966, around march 15.

In 1968, Ngouoh Woungly Massaga started another guerrilla in the bush behind Djoum, in Dja & Lobo division. After a few weeks of war, he gave up the guerrilla, and it was the end of that one.

THE REVOLUTION IN CAMEROON SINCE MULTIPARTISM

Since 1991, the year of multipartism, two revolutions have been organised in Cameroon. The first one started in April 1991, and end in November 1991, by the tripartite conference which took place in Congress Palace in Yaoundé. I think, every Cameroonian keep on remembering it. The second one, is the February 2008 revolution. Like the first one, all Cameroonians know what was done, the way it started, the way it finished.

In 1991, like in last February, people did not succeed to overthrow the Paul Biya and his Rdpc government.

The question is, why do people, since 1956, fail in his attempt to overthrow French colonial rule, Ahmadou Ahidjo government, and now Paul Biya’s one ? Here is the answer : it is not a question of the only willingness, a simple question of goodwill. No. It’s, above all, a question of military weakness. Do people able to get equal armed forces as the government ? The answer, obviously, is no. It is not possible. People cannot get weapons like government. Furthermore, people cannot be trained like the soldiers, I want to say government army. That is the reason why, until now, no revolution succeed in Cameroon, and is not about to succeed, very soon, in Cameroon. The people don’t have weapons, in Cameroon, and cannot easily get them. Cameroon is different from Chad, Central Africa Republic, Democratic Republic of Congo, and so on. In these different countries, to get weapons is easy, due to the fact that, there are many external governments which can provide arms to guerrillas. In Cameroon, who should provide arms to the people ? Nigeria ? Equatorial Guinea ? Gabon ? Chad ? Central Africa Republic ? Congo ? None.

However, in 1991, the revolution failed not only for lack of weapons. It was also because the Beti land did not join the movement. The politicians of 1991 who launched the revolution made a very big mistake. They did not look for the way to associate Beti people in the attempt of overthrow the regime, and, in return, the Beti people save that one. The 1991 politicians, due to their low experience in political struggles (all of them were former CNU and CPDM, two political parties where you cannot get a real experience, except in fraud), brought tribalism in their messages, presented Beti people as the worst people ever created by God. So, they terribly frightened that people, and, unfortunately and also automatically, pushed it into the hands of Paul Biya.

So, he was able to say : “ quand Yaoundé respire, le Cameroun vit”. He said it, because of the big mistake of we, opponents, all along the year 1991, we made.

Now, what is the Cameroon experience of elections ?

THE ELECTIONS IN CAMEROON IN THE PAST AND TODAY

In the part of our country under French rule, all the elections organised were based on rigging. They were not fair. For the ARCAM, Assemblée Représentative du Cameroun, in 1946, March-April, the ATCAM, Assemblée Territoriale du Cameroun, 1952 March, and also in 1956, December, none of these elections was fair and transparent. The French colonial administration used it to eliminate patriot and nationalist candidates.

After 1960, the referendum for the constitution in February 21, was not fair and transparent. The legislative elections of April 10, also. The election of Ahmadou Ahidjo as 1st president of Cameroon, in may 5, was also made with fraud, in the legislative assembly. It was shameful. The last “democratic election” of 1964 during the Ahidjo rule, for the Assembly, was also without transparency. Elections of 1965, 1969, 1972, 1977, 1982, were not elections, due to CNU, Cameroon National Union, as the only political party of the country.

Since Paul Biya rule, the elections organised before 1990, were not elections, because the CPDM was the only party, like CNU was before. After 1990, the Paul Biya government became no longer dictatorial, but also not democratic. It became a “half democratic-half dictatorial” regime.

THE SPECIFIC SITUATION OF TODAY

The one who is not rally aware of political struggles, should rapidly conclude, in the light of the evidences above that, there is no way to overthrow the regime in our country by election. It is not correct. In Cameroon now, we are moving towards  the situation of Kenya and Zimbabwe today.

Actually, Paul Biya is probably the most unpopular African head of state after Robert Mubage. Secondly, the people is extremely angry of his decision to die in power. Thirdly, the Beti people is no more behind Biya, like in 1992. We saw it during the last February riots. Young Beti people, who used to cheat for the CDPM at each election, were burning wheels in the streets, even in front of his palace, like everybody. They no more cared that they were Beti. So, what our country needs now, is a political leader, or a political party, able to join these three situations, to carry them successfully until the next presidential election. The lack of this kind of leader or of political party, should be fatal for our people and our country.

I know, one should talk about fraud. Of course. But, where is that fraud in Noun division in front of Ndam Njoya, or Meme or Mezam, in front of SDF ?

WHAT ARRIVE WHEN A REVOLUTION FAILS ?

The failure of a revolution has terrible consequences for the people. 1/- he starts to doubt in his capacities of overthrow the regime; 2/- consequently, he starts to give up the fight; 3/- he starts to wait for a miracle from God; 4/- finally, the government become more strong than it was before.

So, do not start revolution when you do not have the capacity to succeed. Otherwise, you are going to strengthen the regime. It is true everywhere all over the world, and all along the history. 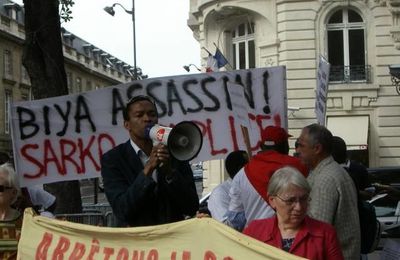